The interactive drawing shows the secondary geared master ellipse, the plot of its equator's lower turning point and the vertical projection line that emanates from the equator running through the main chamber's roof cavities as has been explained on the previous pages. You can zoom in to show the upper and lower chambers in more detail.

First, there are numerous pieces of 'damage' to the stonework of the main chamber, all of which are part of the original architect's design plans and these can be displayed by adding a explanatory illustration to the interactive drawing by clicking here .The names of the sections of the plans are shown on the drawing, and you can see that in the manner in which they are displayed all of the major 'damaged' sections (marked in red) fall on the right side of the drawing and are therefore in the area of the pyramid that is not covered by the moving vertical projection line.

The organisation of the plan sections has been done according to the following logical rule which defines the axis system of the building : 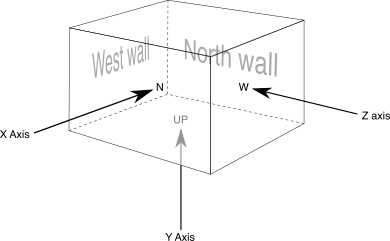 When the main chamber plans are displayed in this way then

which can be seen by clicking here .