With the secondary master ellipse now fixed in place the positioning of the principal master ellipse can be considered, and the method by which it is positioned it exquisite.

As a temporary starting location the master ellipse will be placed in the same manner as was done in the previous sections, with it lower turning point 1 cubit below the base center of the building so that the Geoid is resting on the foundation plinth. If you zoom in to the base center of the pyramid you can see two lines that are highlighted. The horizontal green line runs from the lower turning point of the Geoid, the 'south pole' at the base center of the building, to an intersect point with the Stratopause ellipse. From this intersect on the Stratopause a vertical green line is then drawn until it intersects with the Geoid ellipse directly above it. Because of the manner of this construction, the horizontal position of the vertical line in this geometry is highly sensitive to changes in the Stratopause ellipse radius.

There is a deliberate problem with this that is being presented by the architects: the position of the floor level of the lower chamber is currently an unknown quantity and extensive analysis of the geometry up to this point shows that there is no way of creating this floor line from any of the existing geometry points or lines, leading to the conclusion that the lower chamber floor's vertical position must be determined by other means.

When the geometry of the system was dropped in the previous section of this work to conform to the corrected internal architecture, the Stratopause height below the south pole was defined by realising that when scaled down it matched the 1 cubit height of the foundation plinth of the building. After considerable analysis of the principal ellipses involved in the architecture the following design, based on the Stratopause height, can be deduced. 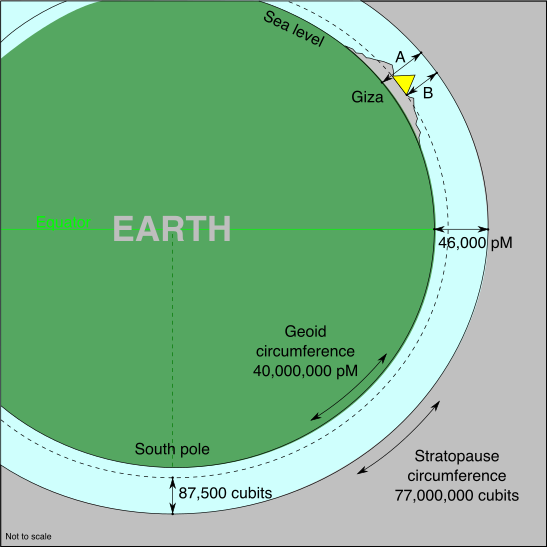 The illustration shows the Earth, Stratopause and the land masses around Giza with the Great Pyramid shown as a yellow triangle, the base of which is placed on the ellipse that is drawn with a dotted line. There are three ellipses in this drawing:

Because the latitude of Giza is known and the eccentricity of the 3 ellipses is the same and is also a known quantity, then you can calculate the values of A) Sea level and B) Ground level at Giza as shown on the illustration and thereby work out the elevation of the Great Pyramid's foundation platform above sea level.

These ellipses and associated dimensions are the starting point from which the whole of the architecture has been designed and are therefore the most important elements that have so far been discovered in this work. They also contain further fundamental details in their mathematics which is covered on the last page of this section. The numerical values of these ellipses can be seen in the appendix to this work on page X5

Altitudes in the lower chamber

The floor of the chamber, which is currently the unknown value that is being determined, is 0.85163m or 1% below the ellipse center at an altitude above sea level of 84.311 m. Because this value is an abloslute measurement and not relative to any part of the building, the definition for the floor of the lower chamber is only correct once the correction to the surveying of the architecture that was identified earlier has been applied to the building.

You can also see that the wall carving, which is made up of overlapping indentations, has been constructed with the last indentation missing - because it needs to be completed by us, and just has been.