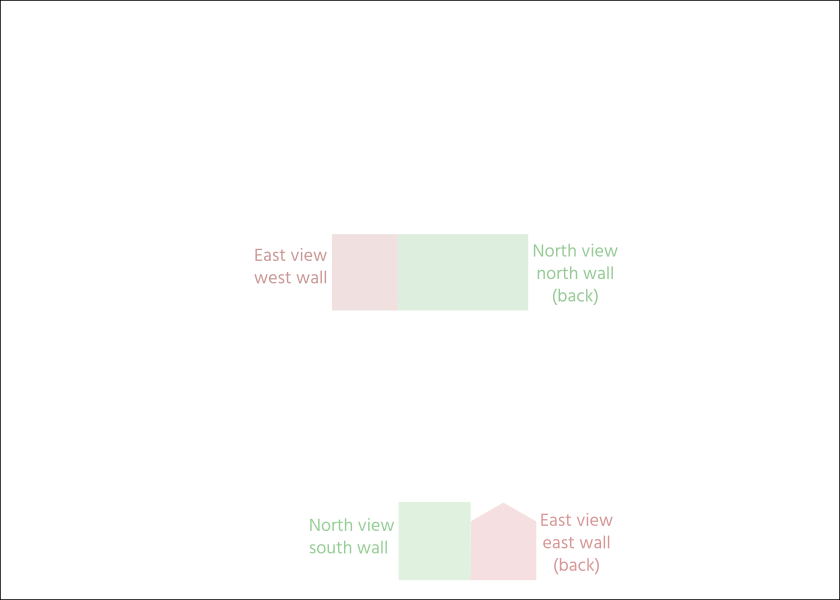 Both the upper and lower chamber geometry of the master design uses a second cross section view of the pyramid and the interactive drawing is showing the internal architectural features of the pyramid as viewed from the north. The entrance passage, descending passage, ascending passage and gallery areas are the narrow parallel vertical lines that runs from deep below the pyramid up to the main chamber.

If you zoom in on the area of the two chambers you can see that the lower chamber is almost square in cross section and there is a roughly carved tunnel which leads from the back of the carving on the east (left) wall and runs out towards the east. The walls of this chamber are made of limestone and there are no stone joints shown in the lower chamber because none could be detected by the surveyors when the room was examined due to the limestone walls having flaked and distorted from salt water damage.

The upper chamber walls are made from granite, are in immaculate condition and the joints in the walls are razor sharp and shown on the interactive drawing as measured by Smyth in his original survey and as viewed from the north. This means that the interactive drawing is showing a view of the rear of the north wall and consequently the entrance to the main chamber is on the left side of the wall and shown as a dark square.

Above the north wall of the main chamber are the five relieving chambers which are made up from a series of long stones that run across the chamber from south to north and therefore the end profile of these stones is shown on the drawing, the details of which are taken from the technical drawings of V.Maragioglio and C.Rinaldi which can be viewed from this link :

When the surveying errors of the internal architecture were corrected earlier in this work (page D11) the internal sections of the pyramid were moved horizontally to the north and vertically down on the original east view of the building, and therefore when viewed from the north the only movement during the correction process was the vertical movement.

The reason that these alignments have not been noticed before is that the correct position of the chambers was concealed by the architects when they included the forced perspective optical illusion in the plug block area of the building, and it is not until you have corrected the internal architecture that the alignments become apparent.