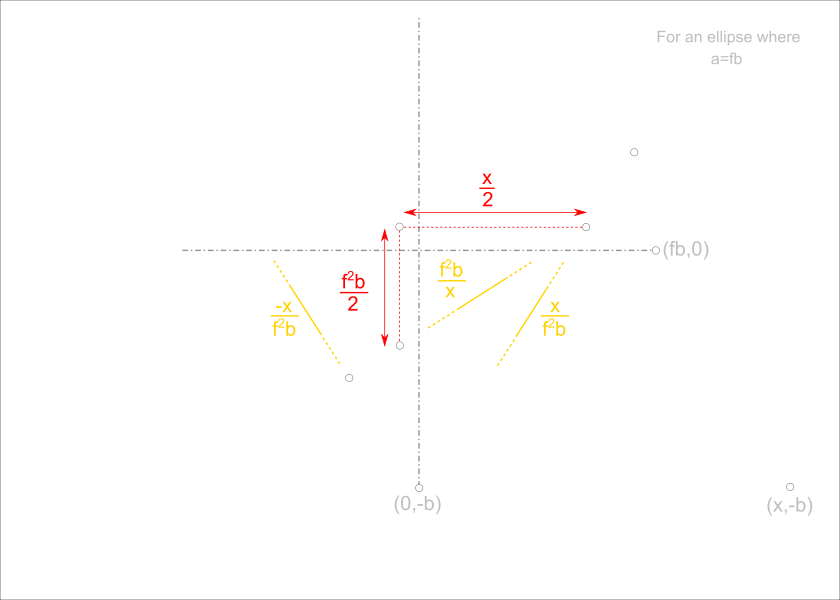 The length of the upper northern shaft is defined using algebra, and understanding how it has been designed gives the first glimpse of the level of sophistication in the pyramid's architecture.

To correctly formulate the algebra, a Cartesian coordinate system is needed that must be the same as the one used when the building was designed. The origin of the system (0,0) is very logically at the center of the ellipse with the positive X axis pointing to the north (right) and the positive Y axis pointing upwards.

Starting from this point the tangent point on the primary ellipse can be determined algebraically, then the shaft exit point on the pyramid's northern face, then the perpendicular intersect point that forms the northern shaft angle, and finally the gradient of the upper northern shaft. To see the results of this algebraic analysis superimposed on the interactive drawing click here.

Key points are shown in white, line gradients are shown in yellow and the northern shaft length's defining properties are shown in red. It took a substantial amount of analysis to understand this system and it is based on the fact that the ellipse is defined from the equality a=fb, as shown on in the top right corner of the drawing. Unless this substitution for a is used, the algebra will produce values for the northern shaft's gradient which have no physical representation.

To see how accurately this algebraic geometry defines the constructed length of the upper northern shaft
zoom in on the start of the shaft at the northern side of the upper chamber. The object information panel shows the algebraic start point of the upper northern shaft as having a vertical coordinate of 43.89m above the pyramid's base level, and the bottom of the horizontal section of shaft was surveyed at 43.86m, giving a difference between the two values of 2.6cm. Petrie's error margin for the vertical component of his surveying within the main chamber is ± 1.5cm.